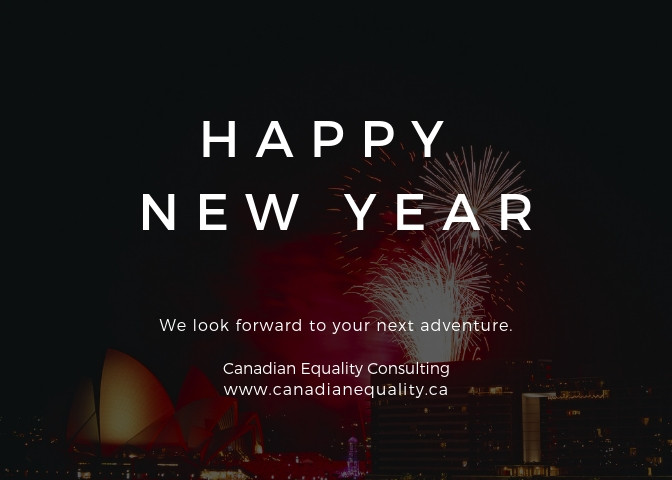 Our #TopNine Year in Review for Equality…

Canadian Equality Consulting wishes you a fantastic New Year. Many people have been sharing their #TopNine highlights from 2018 and we decided to carefully curate a #TopNine Year in Review from the perspective of equality for you.

2018 featured some amazing milestones that have made progress towards achieving equality, but also some setbacks. Progress has been slow and modest but we are on our way. The benefits of equality are being mainstreamed. Equality is not a women’s issue nor a male issue nor just an “HR” issue. It is much more than a social or ethical issue; it is a leadership, innovation and economic issue. Equality is a tool for modernization and a catalyst for innovation and greater performance.

The economic benefits are real and proven.

For example, if workplaces paid women fairly, the economy would flourish. Up to $28 Trillion could be added to the global GDP if we achieve gender equality by 2025, reports McKinsey.

Embedding inclusion into leadership practices and processes from the beginning stages will help set companies up for stronger growth. In the #MeToo and #TimesUs era, it is essential that companies with growth aspirations embed inclusion in their company culture.

Women have been advocating for equal rights for generations. Here is our #TopNine highlights of 2018 to share with you…

1. Local political parties in Alberta have played a big role in encouraging women to run for party nominations.

The UCP also created the She Leads Foundation to encourage and support conservative-minded women to run for politics. She Leads is dedicated to helping women succeed in politics, government and leadership through mentorship, fundraising, media training, and connecting with the business community. UCP Leader Jason Kenney has stated:

I inherited 27 guys and 2 women, which is ridiculous…we don’t believe in quotas but, by gosh, we need to do a better job of reflecting diversity by merit.

2. The City of Calgary created a Social Wellbeing Advisory Committee,

which is a broader version of the City of Edmonton’s WAVE Committee. These committees ensure Council members (that are overwhelmingly male) hear and understand the perspectives of diverse groups of people that live in the city. These committees add incredible value to decision-making and include an element of accountability.

3. The Government of Canada has joined the fight for pay equity.

The goal is to eliminate gender based wage discrimination in the federally regulated sector. Every federal government department is required to have completed a pay equity analysis and produce an action plan within the next few years.

4. The results of the U.S. Midterm elections resulted in the election of incredibly diverse individuals:

women, racialized women, indigenous women, LGBTQ2S+ women, young women… It was a positive sign of hope for the rest of the world.

5. #MeToo continued and harassment in the workplace has been amplified.

There were some reports of backlash experienced in workplaces- although this was rare. #MeToo has been and continues to be a powerful movement to attune society to the everyday experiences of women, shift perspectives and start conversations.

6. The importance of intersectionality was discussed, largely understood and amplified.

In 2018, advocates for gender equality continued to pressure government and companies for change, but the focus also shifted to each other… we heard and amplified each other’s voices among us- indigenous women, women with disabilities, trans women, immigrant women…. Women across all sectors ranging from agriculture, Hollywood, tech sectors, government, politics, etc…

In January of 2018, the Time’s Up Legal Fundspurred from the #TimesUp movement was established to help people battle sexual harassment in the workplace. The fund has over $21M USD to date. The #TimesUp movement gained momentum in 2018 and continues on.

became a hero to sexual assault survivors across the globe and showed us incredible courage. She also reiterated and amplified the problems with our justice system that discourages survivors from seeking justice and allows sexual assault perpetrators to roam free.

9. Accountability was called for in Silicon Valley and in the Tech sector more broadly.

The Google Walkout illustrated the power that employees can have on their employers to tackle systemic problems. Many tech companies are stepping up to the plate and beginning to take action, such as Salesforce. Salesforce hired a Chief Equality Officer and spent $6M to equalize pay among men and women. Salesforce is listed as one of the top companies to work for multiple years in a row.