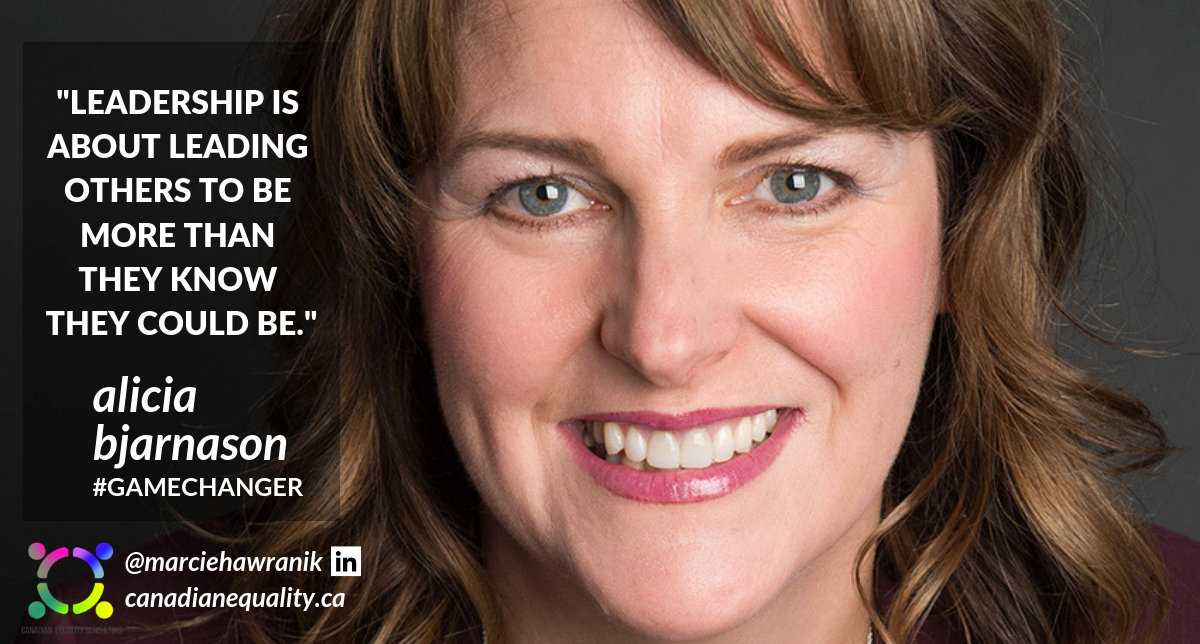 Meet Alicia Bjarnason, our next #GameChanger. Check out our interview with her below.

Alicia is passionate about enhancing innovative thought and diversity to the energy sector in Alberta. After 15 years as an exploration geoscientist, Alicia returned to school and received a master’s in Human Geography – with a focus on corporate culture, diversity and inclusion. Alicia has won multiple awards for her work, including a Queen Elizabeth Scholarship and an Alberta Graduate Citizenship Award. She was nominated in 2017 as a Women of Inspiration. Alicia is an active volunteer for various STEM (Science, Technology, Engineering and Math) related projects and sits on many boards and committees, including as a member of the Women in APEGA Advisory Board. Alicia is President of AWSN since 2013. AWSN is an umbrella organization that supports STEM programming in Alberta with a focus on recruitment, retention and recognition of underrepresented groups. In 2015 Alicia helped to secure a Status of Women Canada Grant and initiated the AWSN Work Re-engagement program. She continues to lead the greater team/initiative as the Program Director. Alicia is also a proud mother of two elementary aged children.

Q1. What is the best piece of career advice you have ever received?

Alicia: Learning that it is okay for a career to take a ‘left turn’. Traditionally we think of careers as a ladder. If you are not ‘going straight up the ladder’, then you are not successful. There are many different types of success. As women progress in their careers, they may find that their paths are not the same as their male counterparts. Embrace this and find your own path to your own definition of success!

Q2. What are some strategies that can help women achieve a more prominent role in their organization?

Alicia: Be your own advocate. But even more effective is to team up with other female professionals and be each other’s advocates and support systems. For my research, I studied women’s only spaces. What I found is that these spaces can be a large benefit to professional women. This can be as simple as coffee with female coworkers to organizing women’s groups inside/outside of your working environment. I am not saying that these relationships/groups should be the only spaces that you occupy, but when working in a male dominated industry/profession they can be a strong asset.

Q3. What is it like being a leader in a male-dominated industry?

Alicia: It is hard to be ‘the only’ – meaning: the only women in a company, the only female STEM professional in the group, and often the only female leader. It has been temping to take on more masculinized traits taught to me by my male mentors/leaders. But long-term I have found that I have been more successful by being true to myself and my strengths. I lead the way I would want to be lead, by encouraging ‘congressive’ behaviours vs traditional ‘ingressive’ behaviours. I have found that this route encourages more collaborative innovate thought within teams, vs traditional protective individualistic ‘silo’ work relationships (for more on this check out Dr. Eugenia Cheng).

Q4. What was the greatest obstacle that you encountered in your career and how did you overcome it?

Alicia: As a women working in a male dominated environment, I learned that some obstacles were larger then I could overcome as an individual. This took me a long time to understand – that some of my struggles were not due to me, my work ethic or my skill sets. Some work cultures are toxic and unwelcoming. It takes courage to leave and find your own path, but the time and energy is worth the effort. Create the support systems you need, do your homework, and take the plunge. Five years ago I made the tough decision to go back to school. This was the best decision I could have made for me! My potential paths forward are now much richer than they were before.

Thank you Alicia for your work and support for women and girls in STEM fields.